skip to main | skip to sidebar

Blessed is the one who considers the poor!
In the day of trouble the Lord delivers him;
the Lord protects him and keeps him alive;
he is called blessed in the land;
you do not give him up to the will of his enemies.
The Lord sustains him on his sickbed;
in his illness You restore him to full health.
Psalm 41:1-3 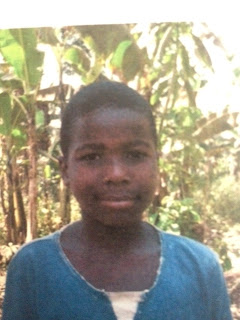 It was a joy to sponsor Robert Ssimbwa last night.  And it was a kind of funny experience.  I don't know if it was the Spirit or my own inclinations, but as I was looking through the stack of pictures of kids needing sponsors, none of them struck me until I came to this one.  It was the weirdest feeling, like, This is the one.  Sponsor him.

His father is dead, and his mother makes what money she can selling small items in the local market.  His grandmother is a peasant farmer.  The card says neither of them can afford to keep him.

The man from the organization who spoke last night, Justus, grew up in Uganda and was abandoned by his mother as a baby.  He spoke to us in this beautifully low, breathy voice with a melodic accent but perfect English.  His skin was as black as pitch, and somehow, even though he was a fish out of water here in Suburbia, USA, he seemed perfectly at ease with himself and everyone else.  He was truly an impressive character and inspired trust.

He talked about the culture shock of coming from Africa to the US, of seeing refrigerators stocked with enough food to last a week or even a month, of seeing children with shoes and shoes and more shoes, two cars in every garage.

And he talked about going back to Africa and having to turn away children for whom he could not find sponsors.  He said the school had grown from 500 children when he first joined the organization to over 2600 children now.  And yet there were still so many children in need.  The sponsorship provides these children with two meals a day, schooling and access to a medical facility on the school site.

So it feels good to sponsor this little Robert.  He's only one; maybe we should've taken five.  But we also support our church's orphanage in Zambia.  And I think I'd rather commit to Robert for the next eight years than take on too many kids and possibly have to drop some.  And it felt like the Holy Spirit's leading that Robert be ours, so I'll go with that.

Justus did leave some questions unanswered.  In particular, while I am excited about helping, he did not address the issue of why there is such pervasive, chronic need over the course of generations in Uganda, with no end in sight.  I don't think in my lifetime, or my parents' lifetime or even in their parents' lifetime, there has ever been a time that the citizens of Uganda have been not in desperate need.  How come?  Is there any hope that Uganda will ever be able to right itself and provide the means for its own citizens to care for their own families.  The world is a much smaller place now.  Is there a reason it is being held back from industrialization?

The answer doesn't change my desire to help, but I do think if he is going to lay a guilt trip on us wealthy westerners, we at least should be privy to why they as a country cannot seem to help themselves.  I understand that the people, like Robert's family, could never affect change, but the country does have a working government.  What the heck have they been doing for their people all these decades?

I guess that's a question for another day.  The point today is that it is a joy to have the opportunity to help the needy.

All Bark
I am a wife of 29 years and mother of four. My ability to expound endlessly on trifling matters far outstrips the attention span of my long-suffering husband and friends. And so I blog.